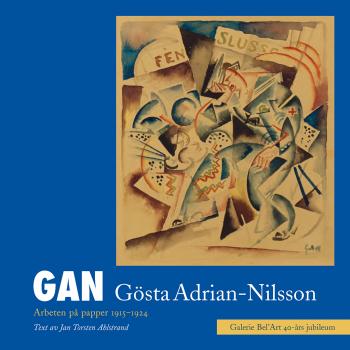 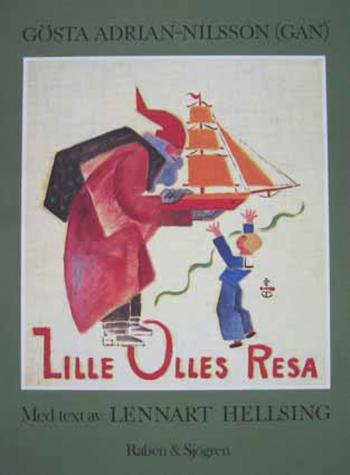 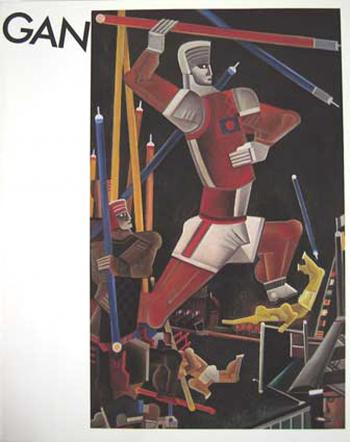 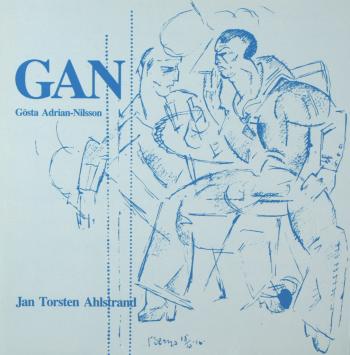 1884
Gösta Adrian-Nilsson was born on April 2nd in Lund, Sweden. His parents, Nils and Anna Nilsson had moved there, as small farmers. They ran a Farmers Shop (Hökeri), in the new working end of town “Nya Stan”, in popular parlance called, “Nöden”.

1903
He graduated an Advanced A level (Studentexamen), at the “Katedralskolan” in Lund.

1904-05
He studied Art at the Technical Society School (Teknisk selskabs skole) in Copenhagen. He then moved to Stockholm for the first time.

1906
He did his military service at Revingehed.

1907
He had his debut as a poet with a collection of poems, Dikter and as an artist with an exhibition in the Art-museum of Lund’s University, all done in the spirit of Art Nouveau. He then returned to Lund.

1908
He released his second poetry collection, Sånger om kärleken och döden, with drawn vignettes in Art Nouveau style. He was admitted into the circle of Bengt Lindforss, the so-called Lund-bohemian.

1910-11
He participated in a group exhibition in Malmö. The Short story- collection Porträttet och andra berättelser was published. During the winter GAN was studying with Kristian Zahrtmann’s school in Copenhagen, which had Johan Rohde as a teacher.

1912
His Short-story collection Den försvunna modellen och andra berättelser, was published. There was an exhibition in Lund, of Landscape and Portraits.

1913
He moved to Berlin, where he got to know Herwarth and Nell Walden. He derived strong impressions from the exhibitions at Galerie Der Sturm, foremost from the Erster Deutcher Herbstsalon. He began to use a modernistic expression, which was inspired by Der Blaue Reiter-group’s expressionism, the Italian futurism and the French cubism/orphism.

1914
Got the job as director (“künstlerischer Erklärer”), in Bruno Taut’s Glashaus at the exhibition of the Deutscher Werkbund, in the summer of 1914, in Cologne. He returned to Lund at the onset of the war in August and met in the fall the mechanical engineer, Egon Östlund in Motala.

1915
He participated in the exhibition Schwedische Expressionisten at the “Der Sturm”, in Berlin. For the first time he showed his new modernistic paintings in his hometown on a separate exhibition in Lund, at the University’s Museum of Art (together with Einar Jolin). He had the lampoon, Konst och kritik published.

1917
Had a manifesto published in the publication Flamman and a drawing in “Der Sturm”. He had an exhibition at “Gallery Der Sturm”, together with Paul Klee and Gabriele Münter. He then started to visit Halmstad as Egon Östlund had moved there.

1918
Separate exhibition with the title Sjömanskompositioner at Gummeson Art gallery with program explanation in the catalog.

1919
Participated with large collections, in three different collective exhibitions at Liljevalch’s Konsthall in Stockholm. During a summer visit to Halmstad, GAN got, through Egon Östlund to know the young painters Axel Olson, Erik Olson and Waldemar Lorentzon, these together with Sven Jonson, Stellan Mörner and Esaias Thorén created the Halmstad-group, ten years later.

1920
He moved to Paris, where he resided until 1925, only interrupted by two long visits to Sweden in 1922 and 1923. He painted the Eiffel Tower. He here got to know Fernand Léger and Alexander Archipenko as well as the composer Viking Dahl, Moses Pergament and Gösta Nystroem.

1921
He participated in the Salon des Indépendants and wrote his program-script Den gudomliga geometrien. He started a collaboration with Moses Pergament respectively Gösta Nystroem to do sketches for a ballet project. He also started to do a series of collages, inspired by Max Ernst. He traveled to Bidart and Bayonne in the south of France. In the fall he moved to 86, rue Nôtre-Dame-des-Champs in Montparnasse.

1922
He visited Albert Gleizes. Den gudomliga geometrien, was published with the help from Gösta Nystroem. Visited for the first time in eight years Berlin, where he had a separate exhibition at “Der Sturm”. He visited Sweden during the summer.

1923
He continued to work in his synthetic-cubistic style and created among others a series of sketches for Ishavsbaletten, with music of Gösta Nystroem. Then he had a separate exhibition in Göteborg and Stockholm. He yet again visited Stockholm for the summer.

1924
He introduced Waldemar Lorentzon and Erik Olson to Léger’s Academie Moderne, where Otto G. Carlsund also was a student. He got to know Wiwen Nilsson. He painted Olympiad, inspired by the summer Olympics in Paris. He then worked intensively during the fall and winter with his folkviseilluminationer.

1925
The folksongs were finished. He moved back to Lund in May. In the fall he exhibited together with Wiwen Nilsson in Lund’s University’s Art-hall.

1927
He executed wall paintings in “Hantverksföreningens”, The Artisan’s celebration hall in Lund. He did a separate exhibition in Malmö’s museum.

1928
He decorated the restaurant Tunneln in Malmö. He got commissioned to draw two big pile rugs for “Skånska Brand” as well as “Gamla Sparbanken” in Lund. He got to know Sven Jonson and Esaias Thorén in Halmstad. He had an exhibition in Göteborg’s Konstmuseum together with Christian Berg, Otto G. Carlsund and Erik Olson. The ballet Krelantems och Eldeling, was cast at the Opera with music by Moses Pergament and with stage design and costumes by GAN.

1929
Kulturens Konstslöjdanstalt (The Art center’s Art-Handicraft) in Lund, weaved four pieces of tapestry according to Gan: s model’s, among others Finnsagan. The tapestries were shown at Kulturens Konst- and Konstindustriutställning (Art industrial exhibition) in August-September, where also the newly formed Halmstad group participates.

1930
He did a separate exhibition in Svartbrödraklostret (Krognoshuset) in Lund. He then participated in the Art Concret-exhibition at the Stockholm exhibition in 1930, with plane geometrical paintings. He did his last journey to Berlin.

1931
Moved yet again to Stockholm, where he resided till his death only interrupted by yearly visits to Lund and Skåne.

1931-65
In the mid-thirties he orientated himself towards surrealism and was writing art critic for the magazine Konstrevy. He exhibited among others in Stockholm, Göteborg, Norrköping, Halmstad, Lund, Malmö and Copenhagen. In 1949, Nils Lindgren’s monograph about GAN was released. He participated in 1953 in the exhibition L’art suédois 1913-1953, at Galerie Denise René in Paris. He had a large retrospective exhibition at Liljevalch Konsthall in 1953; and the last separate exhibition at the Svensk-Franska Konstgalleriet in Stockholm 1963. He was awarded the Sydsvenska Dagbladets Kulturpris 1960 (The South Swedish Daily Newspapers Art award 1960), and also as one of the first 25 people to receive a Government Art Reward, in 1964.

1965
He died in Stockholm, on March 29th and was buried in Lund. There was a memorial exhibition at Skånska Konstmuseum, in Lund’s University’s House.

1979
Exhibition of Svenskt avantgarde in Norrköping Konstmuseum, Where GAN plays a prominent role.
GAN-exhibition at Prins Eugens Waldemarsudde, in Stockholm.

1982
Large Époque exhibition, Léger et esprit moderne, at the Musée d’Art Moderne in Paris, here GAN was honored with his own room and showing seven works. This exhibition was also shown in Geneva and Houston, Texas.

1983-84
Pionjären GAN - works on paper (GAN the Pioneer), exhibition at Galerie Bel’Art in Stockholm. Skånsk wandering exhibition in commemoration of the 100-Year-jubelee of GAN’s birth, produced by Ystad Art Museum in collaboration with Kulturen in Lund.

1984
100-Year-jubilee at Liljevalch Konsthall, Stockholm and in Malmö Konsthall an extensive catalogue was released. Lille Olle's resa with text by Lennart Hellsing was published by Rabén och Sjögren, Stockholm.

1985
The municipality in Lund is attaching a plate of commemoration to GAN’s house of birth. The first half of the monograph over GAN, by Jan Torsten Ahlstrand is released.

1998
Kulturen in Lund, is inaugurating a new base exhibition about the modernists with GAN and Wiwen Nilsson as the prominent figures, and the precursors of the Yearbook Aspekter på modernismen.

2000
The exhibition Schwedische Expressionisten, at the Der Sturm, in Berlin in 1915, is shown in a reconstructed form at the Felix-Nussbaum-Haus in Osnabrück and at Kulturen in Lund, the latter in conjunction with the Swedish-Danish cultural project Kulturbro 2000. The Epoch exhibition Utopi och verklighet, about Swedish modernism, is shown at the Moderna Museet, in Stockholm, with a considerable number of works by GAN. A part of the exhibition travelled to New York the following year.

2002
GAN-exhibition at Mjellby Konstmuseum in Halmstad. An extensive catalogue was published.

2011
GAN - modernistpionjär och outsider, retrospective exhibition at Waldemarsudde, Stockholm, Malmö Konstmuseum and Norrköpings Konstmuseum. A comprehensive monograph about the artist, with text by Jan Torsten Ahlstrand will be published by Carlssons bokförlag, Stockholm